Anyone know a good exorcist?

Who is this devil-child and what did she do with my little angel?

Our little princess.  Oy!!  What a princess she is.  From day one, she has been that sweet little girl who could melt your heart with her smile and big blue eyes.  She has her daddy wrapped around her fingers – and I hate to admit but at times I get caught in there too.   Being that our first child is a boy, we were accustom to 24/7 typical boy.  Cars, trucks, mud, rocks, running, jumping, super-hero typical boy.  So when our dainty little girl came into our lives, it was almost relaxing in a way.  We would laugh and think “this is so much easier”.
When her 2nd birthday hit, we did prepare ourselves for The Terrible Two’s, but only based on what we already knew from our first experiences with it.  When I think back to our son, there was definitely an increase in tantrums, he began to get a bit mouthy with us and that dreaded word “NO” echoed throughout our home.  What we didn’t realize was how easy we had it with him, a statement until a week ago I never thought I would say when comparing my two kids.
Her terrible-two’s have hit like a vengeance.  She is definitely testing all her limits and every ounce of patience I have in my soul.  First it began with the full out tantrums.  I mean throwing herself on the ground, fist pounding, screaming at the top of her lungs tantrums (and WOW that girl can scream!).  Then came the diva-like attitude and the new phrase that now echoes through our house “No Mommy, I do it!” when I try to help her with anything.  So I breathe, tell myself that this is just her asserting her independence and that it’s a good thing.  Hey, at least she wants to try it herself!  So what if it adds an extra 20 minutes to our morning because she needs to get herself ready, I’ll just get up 20 minutes earlier.
Then came mischief, which you would be surprised to find out is very new to us!  Our son went through a very small stage where he would open cupboard doors just because he could but after a few re-directions, he learned to stay away.  Even with our daughter, as she began to crawl & walk, we never had to really lock anything up, she didn’t seem interested.  I could be doing laundry or taking a quick shower and wouldn’t have to worry at all about my kids were doing.   However, after the events of this past week, Mike and I have a new motto: Hide the Javex.  If it’s within her reach, it is fair game.  If I can’t see her, she is definitely getting into something.  If it’s a door, she can now open it.
It started with her opening a jar of diaper rash cream and rubbing it all over her stuffed animals and dolls while she was supposed to be napping.  Then she escaped from her room one evening and emptied an entire bottle of dog shampoo into the tub.  Another day, she squeezed half a tube of toothpaste onto the carpet.  She has also taken my jewelry box down from the counter in my bathroom and emptied it on the floor, causing me to search frantically for 20 minutes until I finally found my engagement ring that she hid in her room.  This was just in the last week! 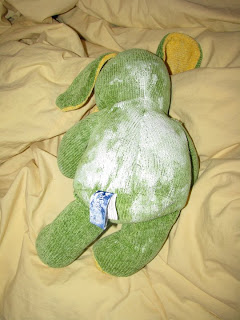 Every time we think we’ve put everything out of her reach, she surprises us.  There was a bowl of assorted Valentines candy our son brought home from school.  We had been keeping it on the kitchen table but I decided to move it to the counter so it was definitely out of her reach.  Our cleaver little monkey waited until Mike started vacuuming, went up to the bathroom, carried a step stool all the way back downstairs, set it up at the counter and proceeded to start eating the candy in the bowl.
Funny enough though, I am thankful for all that she is putting us through.  It’s a nice reminder that parenthood is not predictable.   We need to be kept on our toes – it makes us better parents.  For all the times that I shake my head and wonder what on earth is going through their minds, I have to stop and have a laugh.  It is quite funny when you think about it.
xo – J
GOT SOMETHING TO SAY?
CLICK HERE TO JOIN THE CONVERSATION ON FACEBOOK

Entrepreneur, Child-Wrangler and Domestic-Goddess-Wannabe, Jenn is a married, mother of two. She is also the founder of That's So Social and Editor in Chief of Travel Mavens. Likes: travel, eggs benedict, yoga pants, dogs, and Netflix.